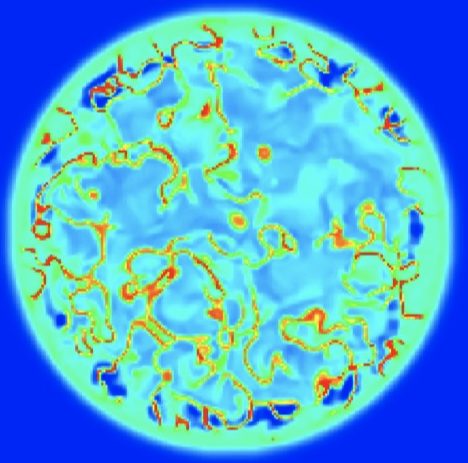 We have used the adaptive mesh refinement hydrodynamic code, MG, to perform idealized 3D magnetohydrodynamical simulations of the formation of clumpy and filamentary structure in a thermally unstable medium without turbulence. A stationary thermally unstable spherical diffuse atomic cloud with uniform density in pressure equilibrium with low density surroundings was seeded with random density variations and allowed to evolve. A range of magnetic field strengths threading the cloud have been explored, from beta = 0.1 to 1.0 to the zero magnetic field case (beta = ∞), where beta is the ratio of thermal pressure to magnetic pressure. Once the density inhomogeneities had developed to the point where gravity started to become important, self-gravity was introduced to the simulation. With no magnetic field, clouds and clumps form within the cloud with aspect ratios of around unity, whereas in the presence of a relatively strong field (beta = 0.1) these become filaments, then evolve into interconnected corrugated sheets that are predominantly perpendicular to the magnetic field. With magnetic and thermal pressure equality (beta = 1.0), filaments, clouds and clumps are formed. At any particular instant, the projection of the 3D structure on to a plane parallel to the magnetic field, I.e. a line of sight perpendicular to the magnetic field, resembles the appearance of filamentary molecular clouds. The filament densities, widths, velocity dispersions and temperatures resemble those observed in molecular clouds. In contrast, in the strong field case beta = 0.1, projection of the 3D structure along a line of sight parallel to the magnetic field reveals a remarkably uniform structure.