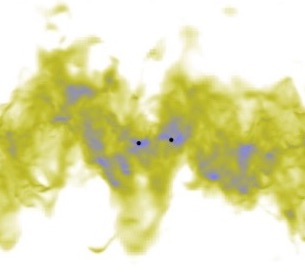 Molecular clouds are to a great extent influenced by turbulent motions in the gas. Numerical and observational studies indicate that the star formation rate and efficiency crucially depend on the mixture of solenoidal and compressive modes in the turbulent acceleration field, which can be quantified by the turbulent driving parameter b. For purely solenoidal (divergence-free) driving previous studies showed that b = 1/3 and for entirely compressive (curl-free) driving b = 1. In this study, we determine the evolution of the turbulent driving parameter b in magnetohydrodynamical simulations of molecular cloud formation and evolution. The clouds form due to the convergence of two flows of warm neutral gas. We explore different scenarios by varying the magnitude of the initial turbulent perturbations in the flows. We show that the driving mode of the turbulence within the cloud strongly fluctuates with time and exhibits no clear correlation with typical cloud properties, such as the cloud mass and the (Alfvén) Mach number. We specifically find that b strongly varies from b ˜ 0.3 to b ˜ 0.8 on time-scales t ≲ 5 Myr, where the time-scale and range of variation can change from cloud to cloud. This rapid change of b is primarily associated with gravity making the acceleration field more compressive as a result of global contraction of the cloud and subsequent onset of star formation. We conclude that the effective turbulence driving parameter should be treated as a free parameter that can vary from solenoidal to compressive in both time and space.