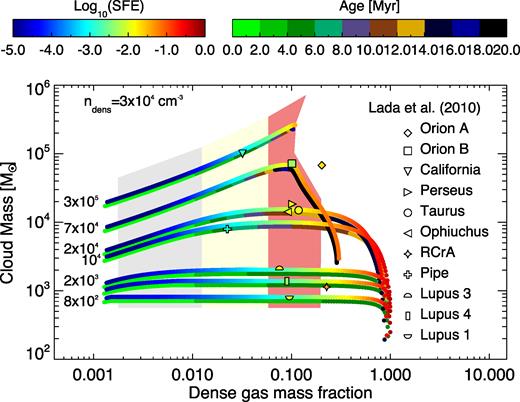 In previous contributions, we have presented an analytical model describing the evolution and star formation rate (SFR) of molecular clouds (MCs) undergoing hierarchical gravitational contraction. The cloud’s evolution is characterized by an initial increase in its mass, density, SFR, and star formation efficiency (SFE), as it contracts, followed by a decrease of these quantities as newly formed massive stars begin to disrupt the cloud. The main parameter of the model is the maximum mass reached by the cloud during its evolution. Thus, specifying the instantaneous mass and some other variable completely determines the cloud’s evolutionary stage. We apply the model to interpret the observed scatter in SFEs of the cloud sample compiled by Lada et al. as an evolutionary effect so that, although clouds such as California and Orion A have similar masses, they are in very different evolutionary stages, causing their very different observed SFRs and SFEs. The model predicts that the California cloud will eventually reach a significantly larger total mass than the Orion A cloud. Next, we apply the model to derive estimated ages of the clouds since the time when approximately 25 per cent of their mass had become molecular. We find ages from ˜1.5 to 27 Myr, with the most inactive clouds being the youngest. Further predictions of the model are that clouds with very low SFEs should have massive atomic envelopes constituting the majority of their gravitational mass, and that low-mass clouds (M ˜ 103-104M&sun;) end their lives with a mini-burst of star formation, reaching SFRs ˜300-500M&sun; Myr-1. By this time, they have contracted to become compact (˜1 pc) massive star-forming clumps, in general embedded within larger giant molecular clouds.