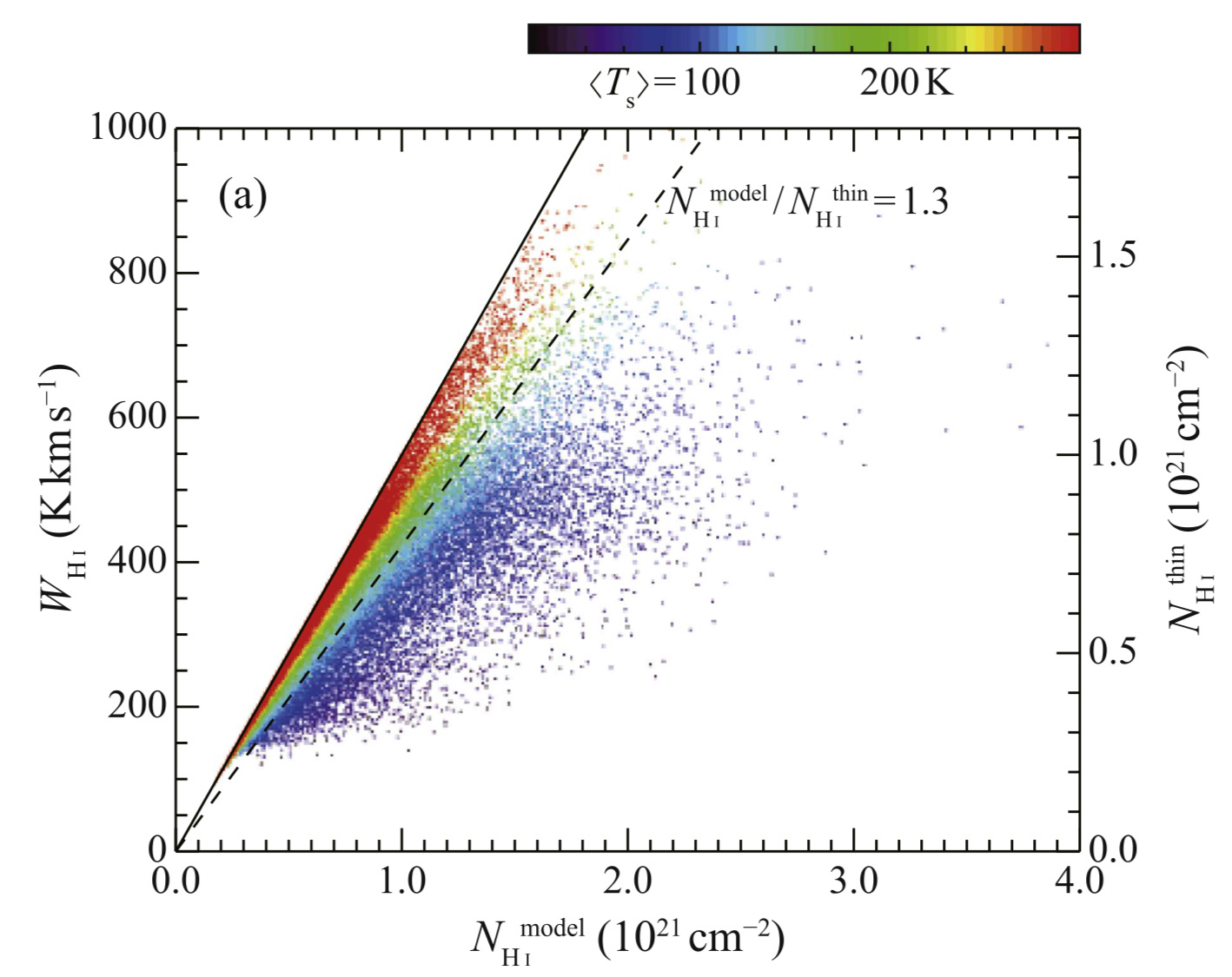 We carried out synthetic observations of interstellar atomic hydrogen at 21 cm wavelength by utilizing the magnetohydrodynamic numerical simulations of the inhomogeneous turbulent interstellar medium. The cold neutral medium (CNM) shows a significantly clumpy distribution with a small volume filling factor of 3.5%, whereas the warm neutral medium (WNM) has a distinctly different and smooth distribution with a large filling factor of 96.5%. In projection on the sky, the CNM exhibits a highly filamentary distribution with a subparsec width, whereas the WNM shows a smooth, extended distribution. In the H I optical depth, the CNM is dominant and the contribution of the WNM is negligibly small. The CNM has an area covering factor of 30% in projection, while the WNM has a covering factor of 70%. This means that the emission-absorption measurements toward radio continuum compact sources tend to sample the WNM with a probability of 70%, yielding a smaller H I optical depth and a smaller H I column density than those of the bulk H I gas. The emission-absorption measurements, which are significantly affected by the small-scale large fluctuations of the CNM properties, are not suitable for characterizing the bulk H I gas. Larger-beam emission measurements that are able to fully sample the H I gas will provide a better tool for that purpose, if a reliable proxy for hydrogen column density, possibly dust optical depth and gamma rays, is available. The present results provide a step toward precise measurements of the interstellar hydrogen with ˜10% accuracy. This will be crucial in interstellar physics, including identification of the proton-proton interaction in gamma-ray supernova remnants.

These simulations deal with converging H I flows as a function of time over 10 Myr. The gas is originally H I, while formation of H2 molecules is incorporated by using the usual dust surface reaction. The results indicate two phases of HI, the CNM and the WNM, as well as time-dependent transient gas, which behaves intermediately. In the following, we call for convenience the gas with Ts below 300 K the CNM and that with Ts above 300 K the WNM.

The simulations assume converging H I gas flows at 20 km/s that are initially in pressure equilibrium with the standard interstellar H I having pressure of $p k^{-1} =5.2 \times 10^3$ K cm$^{-3}$. The H I gas flow is inhomogeneous and continuously enters the box from the two opposite boundaries of a cube of (20pc)^3. Formation of molecules such as H2 formation on dust surfaces and CO formation via CH+ with the effects of self/dust UV 2 shielding are taken into account, and radiative and collisional heating and atomic and molecular cooling are incorporated.

Size of simulation is 1024^3 but they worked with a degraded version of 512^3 to reduce the data size. In this reduced version, the pixel size is 0.04 pc.
Simulations runs for 10 Myr.
The gas mass increases with time.

The authors mention that the ISM compressed by the converging flows in the 0.5–1.0 Myr seems to be the representative state of the dynamic ISM. They justify it by the fact that the ISM is perturbed by a supernovae explosion every 1Myr.

On the other hand, most of the gas seems to be in the thermally unstable regime, probably due to the rather high pressure and high turbulent energy induced by the convergent flow.

In order to gain insight into the detailed physical conditions of the interstellar H I gas and its observed properties in the solar neighborhood, we carried out synthetic observations of the interstellar HI gas at 21cm by using the MHD numerical simulations of the realistic inhomogeneous H I gas that is in the converging flows (Inoue & Inutsuka 2012). The simulations incorporate the microscopic processes including the H2 formation reactions, the magnetic field, and the heating/ cooling. The simulated HI gas is highly turbulent and inhomogeneous and is far from equilibrium with a typical dynamical timescale on the order of megayears. The results were compared with the conventional emission–absorption measurements. The main conclusions of the present study are summarized as follows:

In summary, we studied the detailed properties of the interstellar HI gas in the solar neighborhood and made it clear that the CNM has significant subparsec structures with a small covering factor in the sky. We showed that the observed quantities in the conventional emission–absorption measurements toward radio continuum point sources are subject to an observational bias toward the WNM having a large covering factor. This bias leads to underestimating $\tau$ and $N_{HI}$. Accordingly, the conventional HI mass must be revised upward by a factor of 1.3 in the present model. The present results provide a step forward toward more accurate determination of the interstellar proton mass. The mass is crucial for identifying the ISM target protons, for instance, in cosmic-ray proton reactions in the gamma-ray SNRs. The results are qualitatively consistent with the Planck/IRAS-based analysis of HI by Fukui et al. (2014, 2015), while a more quantitative pursuit remains as future work, including a test of the nonlinear behavior of the submillimeter dust optical depth due to dust evolution and an extension to the whole sky.