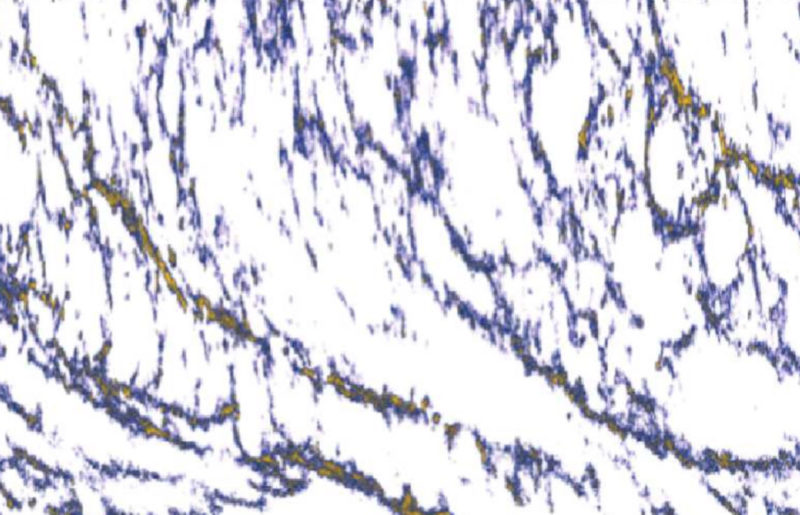 There are two theories of stellar spiral arms in isolated disc galaxies that model stellar spiral arms with different longevities: quasi-stationary density wave theory, which characterizes spirals as rigidly rotating, long-lived patterns (I.e. steady spirals), and dynamic spiral theory, which characterizes spirals as differentially rotating, transient, recurrent patterns (I.e. dynamic spirals). In order to discriminate between these two spiral models observationally, we investigated the differences between the gas velocity patterns predicted by these two spiral models in hydrodynamic simulations. We found that the azimuthal phases of the velocity patterns relative to the gas density peaks (I.e. gaseous arms) differ between the two models, as do the gas flows; nevertheless, the velocity patterns themselves are similar for both models. Such similarity suggests that the mere existence of streaming motions does not conclusively confirm the steady spiral model. However, we found that the steady spiral model shows that the gaseous arms have radial streaming motions well inside the co-rotation radius, whereas the dynamic spiral model predicts that the gaseous arms tend to have tangential streaming motions. These differences suggest that the gas velocity patterns around spiral arms will enable distinction between the spiral theories.

Summary of the Paper

The two main theories of spiral arms are the density waves or the “dynamic” arms. The first scenario is more technically known as the quasi-stationary spiral structure (e. g. Lindblad 1963; Lin and Shu 1964; Bertin and Lin 1996). In this model, the spiral arm is described as a density perturbation that rotates with a constant pattern speed. The pattern can be imagined as a “rigidly” rotating structure with a long lifetime. There is a galactocentric distance where the gas and stars corotate with the arm, which is known as the corotation radius (Rc). The gas inside this radius overtakes the arm while the opposite is true for gas outside this radius. In this scenario, the gas is expected to form shocks as it flows into the arm (e. g. Fujimoto 1968, Roberts 1969, Gittins and Clarke 2004, Dobbs, Bonnell and Pringle 2006, Lee 2014, Sormani et al. 2017 too mention a few examples). This model predicts that the velocity jumps drastically in the shocks and the compression tends to form offset from the potential minimum.

The second scenario stems from the works of Goldreich and Lynden-Bell (1965) and Julian and Toomre (1966). In this model, the arm is describe as a structure that corotates with the rest of the galaxy (e. g. Wada et al. 2011). In this case, the gas does not necessarily overtake the arm as it rotates around the galaxy. The gas tends to settle in the potential minimum of the arm and can flow from both sides (e. g. Wada et al. 2011).

Both scenarios will produce different kinematics in the gas flowing near the arms, it is important to explore how this projects in to observable differences in order to examine both theories from an observational point of view.

Aim of the Paper

Develop a new methodology for distinguishing these spiral models. It focuses on the differences in the gas kinematics predicted by both models as it is easier to study gas via observations.

Galaxy model composed of a exponential-sech^2 stellar disc, a Hernquist bulge, and a gas disc with an initial profile similar to the stellar disc. The dark matter halo is a fixed potential assuming a Navarro-Frenk-White model. The model has a rotation curve reaching approximately 200 km/s similar to the MW (see Baba 2015).

The stellar disc is assigned 6.4 million particles and the gas disc, 4.5 million. The mass resolution in the gas is approximately 3 x 10^3 solar masses. The model develops a central bar.

The axisymmetric potential is based on a calculation obtained from the terms of the dynamic model. It adds a spiral perturbation that assumes a cosine spiral arm perturbation characterized by an amplitude (A), the number of arms (m), the pattern speed (Omega_p), pitch angle i, and the vertical scale height (z_0).

Spatial Distribution of the Gas

Fig. 1 (a) shows the molecular gas distribution for the spiral potential model. The red tracks follow the paths for some gas particles and show that the gas is entering and leaving the arm, but the flow has a sudden change of direction due to the spiral arm shock. Also, the densest gas is offset from the potential minimum, which indicates that the shock is forming after the gas passes the minimum potential.

Fig. 1 (b) shows that the molecular gas distribution is more patchy, in contrast to that of Fig. 1 (a). The authors note that for the N-body model, the spiral arms are more transient and the amplitudes vary in timescales of a few 100 Myr. Also, the pitch angle of the arm varies with time. The red tracks show that gas is falling into the arm from both sides of the arm, which is one of the key differences with respect to the spiral potential model.

In terms of streaming motions, the left panel of Fig. 2 shows that, for the spiral potential model, the radial velocity increases as the gas is falling into the arm and reaches a minimum at the point where the gas has the highest density. On the other hand, the minimum circular velocity occurs close to the position of the potential minimum. For the N-body potential (right panel of Fig. 2), the gas spiral arms correspond to points where the radial velocity is close to zero. The gas velocities in the N-body potential broadly agree with those of the spiral potential, but present more irregular profiles.

The concluding notes mention that it is still not possible to measure radial and azimuthal velocity components directly as line-of-sight velocities are the quantities directly observed, so more work is needed in this aspect. Methods that help to distinguish observationally these spiral arm scenarios (steady vs. dynamic) are needed. The authors also conclude that the similarities in the velocity profiles between the two models imply that measuring streaming motions is not sufficient to distinguish both scenarios. They state that it is important to measure global-scale velocity maps as well as CO-H-alpha (Egusa et al. 2009) offsets and gas-stellar arm offsets (Kendall et al. 2011, Baba et al. 2015) to have a better picture.