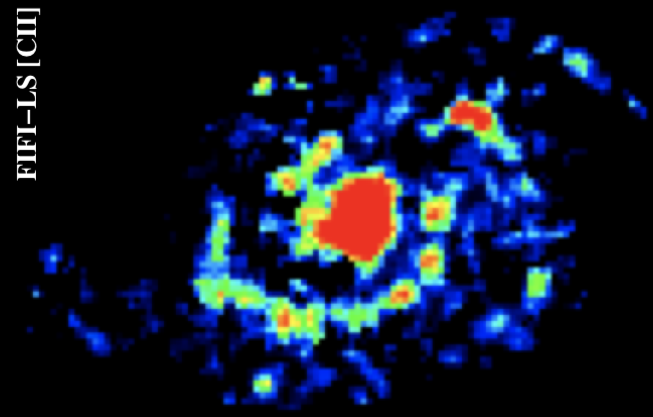 We present a [CII] 158um map of the entire M51 (including M51b) grand–design spiral galaxy observed with the FIFI-LS instrument on SOFIA. We compare the [CII] emission with the total far–infrared (TIR) intensity and star formation rate(SFR) surface density maps (derived using H_alpha and 24um emission) to study the relationship between [CII] and the star formation activity in a variety of environments within M51 on scales of 16″ corresponding to ~660 pc. We find that [CII] and the SFR surface density are well correlated in the central, spiral arm, and inter-arm regions. The correlation is in good agreement with that found for a larger sample of nearby galaxies at kpc scales. We find that the SFR, and [CII] and TIR luminosities in M51 are dominated by the extended emission in M51’s disk. The companion galaxy M51b, however, shows a deficit of [CII] emission compared with the TIR emission and SFR surface density, with [CII] emission detected only in the S-W part of this galaxy. The [CII] deficit is associated with an enhanced dust temperature in this galaxy. We interpret the faint [CII] emission in M51b to be a result of suppressed star formation in this galaxy, while the bright mid- and far-infrared emission, which drive the TIR and SFR values, are powered by other mechanisms. A similar but less pronounced effect is seen at the location of the black hole in M51’s center. The observed [CII] deficit in M51b suggests that this galaxy is a valuable laboratory to study the origin of the apparent [CII] deficit observed in ultra-luminous galaxies.