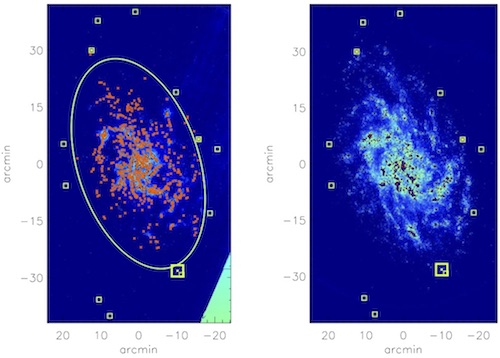 We carried out deep searches for CO line emission in the outer disk of M33, at R>7 kpc, and examined the dynamical conditions that can explain variations in the mass distribution of the molecular cloud throughout the disk of M33. We used the IRAM-30~m telescope to search for CO lines in the outer disk toward 12 faint mid-infrared (MIR) selected sources and in an area of the southern outer disk hosting MA1, a bright HII region. We detect narrow CO lines at the location of two MIR sources at galactocentric distances of about 8 kpc that are associated with low-mass young stellar clusters, and at four locations in the proximity of MA1. The paucity of CO lines at the location of weak MIR-selected sources probably arises because most of them are not star-forming sites in M33, but background sources. Although very uncertain, the total molecular mass of the detected clouds around MA1 is lower than expected given the stellar mass of the cluster, because dispersal of the molecular gas is taking place as the HII region expands. The mean mass of the giant molecular clouds (GMCs) in M33 decreases radially by a factor 2 from the center out to 4 kpc, then it stays constant until it drops at R>7 kpc. We suggest that GMCs become more massive toward the center because of the fast rotation of the disk, which drives mass growth by coalescence of smaller condensations as they cross the arms. The analysis of both HI and CO spectral data gives the consistent result that corotation of the two main arms in this galaxy is at a radius of 4.7+-0.3 kpc, and spiral shock waves become subsonic beyond 3.9 kpc. Perturbations are quenched beyond 6.5 kpc, where CO lines have been detected only around sporadic condensations associated with UV and MIR emission. (As it appears in paper.)